Prelude: Big hello to nine plus and Ill-Esha! We’re more than pleased to have you both on issue ten | re-birth. We have many pressing questions to ask you, and some nonsensical ones… but we’ll attempt to keep those to a minimum. So let us get to it! 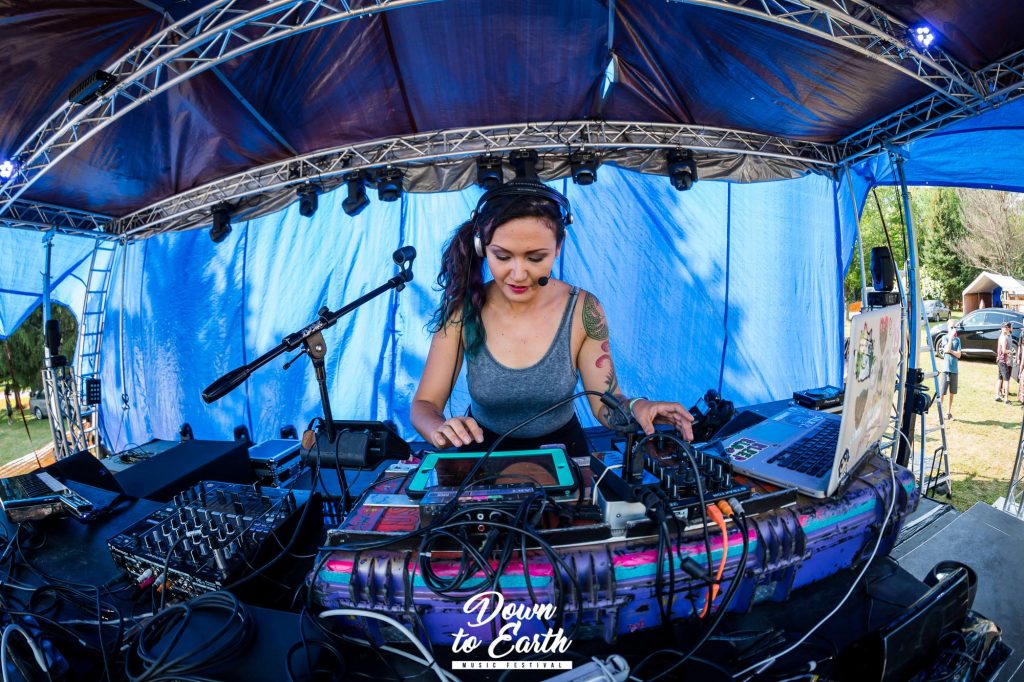 Pictured above : Ill-Esha @ Down to Earth music festival.

Phuture: nine plus, as aforementioned, we’re really excited to have you on the tape, and would love to dive further into what got you here! What inspired “into the sun”?

nine plus: Into the sun was inspired by a variety of different events and things and that caused it to actually take a very long time to finish because of how many different directions I had in mind for it. The biggest inspiration though was obviously Esha’s outstanding vocals :).

Phuture: You’ve had releases on Phuture Collective several times in the past. Have you witnessed a large amount of personal growth musically since your first release? Where do you plan on letting your creativity flow in 2018 with your tunes?

nine plus: Definitely. I was still very much a beginner (I still am just less so) at producing when I first released off Phuture. I think my biggest weaknesses at that point were the actual technical points of production such as not knowing the DAW or how to do specific things on it as well. I’m very grateful for everyone who’s contributed to me becoming more knowledgeable about producing. And I think I’m headed towards a very new direction now that I have enough of the technical skill to produce (relatively) what I hear in my head. I think you will hear a much more creative me in 2018 and I hope you will enjoy that me.

Phuture: How do you feel about this direction you’re heading toward? Was your initial goal to be making what you are now or have you strayed from what you once wanted?

nine plus: Musical tastes change, for me I think I’m drawn to the unknown. Hearing new sounds I’ve never heard before and trying to figure out how to create those sounds or ideas or shapes and use them to contribute to my own ever developing sound is something of beauty to me. I’ve always really known that I wasn’t going to want to create the same style of music forever and I think that taking what I’ve learned from past styles and sounds and using it in the next sound I want to develops was, and is my goal.

Phuture: It’s no secret that Phuture Collective as a whole promotes music that seems odd (to say the least) to the mainstream. Would you say you’ve contributed to that portion of our discography? Why or why not? Are you pleased with the niche you’ve found yourself in?

nine plus: I think to an extent yes, and to an extent no. I think the term odd music is very relative to the person listening. If I showed some of my more creative tracks to someone who I know in real life they may think I have something severely wrong with my mental health but if I showed them to some people in phuture they might consider them relatively cliche. But than if I showed some of the music I play on the saxophone and the jazz that I have come to love to the producers in phuture, while they may accept it I don’t think many of them would enjoy it as it’s probably so different from what they listen to regularly. This obviously isn’t true for everyone, but my point is that preferred styles and sounds and labeling certain sounds as odd is a complete matter of what that person’s preferences are and what they’ve been exposed to.

Phuture: Mexican food. Yay or nay, and why or why not? If you’re a fan, what’s your favorite dish? I’m partial to enchiladas myself…

nine plus: I really love Mexican meats so I’d have to say a burritos with tons of beef and Mexican sausage.

Phuture: Who are three of your favorite artists that 2017 introduced you to, and why does their music resonate with you? How/why should we expect to see these artists on the come-up in 2018? Also, any upcoming projects with anyone special soon?

nine plus: Oh this is a good question. Well to start it off I’d have to say discovering JonEcks was one of the “oh fuck moments” where you just like reconsider everything you make. All of the elements that he incorporates into his music and all the emotion combines to form a perfect blend of creativity as raw feeling. Next I’d say someone I have recently discovered thanks to DECAP‘s amazing taste in music and quality reposts a little known producer known as Oh Gosh Leotus. All of his tracks are absolutely insane and amazingly well done and I think you should ALL check him out. Finally but definitely not least I’d say my boy wyt. His style is so diverse and his skill set is one of the casters I’ve ever seen. Check him out if you haven’t already, and look for him to make some major come ups in 2018. Also I’m working with wyt on a track or maybe two, so be ready for that ;).

Phuture: Thank you for providing us with those wonderful responses! Now it’s time to move forward with the next set of questions for Ill-Esha You’ve been a part of the Phuture team for a little while as well, since your release on TYDE. Could you tell us how you discovered what Phuture Collective is all about?

Ill-Esha: through my friendship with nine and through the magic of Discord, I started meeting an exciting flavor of producers that was skilled and innovative, making tunes that were accessible yet super unique. I started noticing that a huge percentage of these people were releasing on Phuture and started to look into it, and was really impressed by not just the musical caliber but also the philosophy.

Phuture: Great! That’s inspiring to hear, especially regarding your recognition of our philosophy.
Did nine plus and yourself meet through Phuture Collective or elsewhere? What’s the story there? How did you end up working together on this release?

Ill-Esha: We actually met through the EDM Production Discord, which I’ve been running for a year now. It’s the companion to the subreddit of the same name, and has actually been a huge breath of fresh air – as a more experienced (*old, haha) producer, I was finding that I was just hearing the same stuff from the people I’d been playing shows with for years, and it’s pretty exciting to meet the next generation.  He was one of the first and most talented people I met, and we’ve become very close friends as well – although we’ve still never met!  I hope to work on many tracks with him, as I feel a synergy of both character and creativity I don’t get with too many artists.

Phuture: Awesome. It’s great that artists can meet and work together anywhere in the world thanks to the internet! Speaking of which, what are your thoughts on net neutrality in the United States? Are we doomed?

Ill-Esha: As I’m still waiting for my delayed (due to the current administration) immigration papers, I’m just going to say that the United States is the greatest place in the world and can do no wrong, ever.  All Hail!

Ill-Esha: There’s too many to count, but off the top of my head I’ve been really enjoying supporting tunes from frost, shisto, alex martian, knyvez, Stereotype and Tim Schaufert – all of who I met through Discord! And of course nine plus 🙂

Phuture: What were some of your earliest real inspirations musically? What styles of music typically ‘hit you in the feels’ early in life? What was the first record you ever purchased for yourself?

Ill Esha: I entered the angst of early high school amidst the peak of the grunge era.  I was definitely crying by candlelight vigil with friends when Kurt Cobain died, and have always been into more moody, minor-chord, edgy music – this evolved into loving industrial bands like Tool (still a favorite).  I switched schools often due to being a nerd, and each school brought a new era of music – the next thing was getting into hip hop and learning how to rap with my friends, which is where I was given my name (yes, that’s why my artist name makes you think of a 14 year old MC – because it is).  I accidentally discovered jungle/drum&bass when I picked up a copy of “Original Nuttah” by Shy FX while my parents dropped me at Amoeba Records in SF one summer vacation, and that one instance completely mesmerized me into realizing there was this new way to create and experience music that could encompass all the styles I had liked before, and more.

Phuture: You’ve been around the scene for ages now and not just doing one thing. From producing to singing to community management to MCing and beyond – your diversity is recognized by thousands. If you could only do ONE of your skills for the next year which would it be?

Ill Esha: I’ve already been retreating back into my shell a bit, I’ve been touring for many years and I’m feeling it’s time to step back and work behind the scenes a bit, so producing it is.  I’ve actually been spending more time working with other artists writing songs and coaching them, so it’s a huge change for me, but one must challenge oneself to continue evolving as an artist and human being both.

Phuture: Well said, we cannot agree more – challenging yourself will only heighten your possibilities and opportunities.
Final question(s): What can we expect to hear from you in 2018? Any new goals you wish to tackle this upcoming year musically? Are you working on anything now that you’re looking forward to sharing with the world?

Ill-Esha: Frost and I have been slowly putting together this collab album, and it’s blowing my mind what we come up with.  2018 is going to be the year we sign it and bring it out to the world, so that’s definitely at the forefront of my mind.

Phuture: Thank you both nine plus and Ill Esha for answering those questions! Anything either of you would like to finish off with?

nine plus: Yeah! Thank you for this family that you have created from like mindedness as much as from our differences. It’s a breath of fresh air to have this platform, and community to be able to exist as an artist without the fear of judgement and the knowledge that everyone here wants you to succeed. Thanks. Stay focused. Be relentless. Never give up. Phuture is the future.

Ill-Esha:  Never forget your community even in your artistic solitude.  Building each other up is what lifts us the highest.

Discover more from nine plus here:

Read our other interview with nine plus (aka Third Floor) – here.